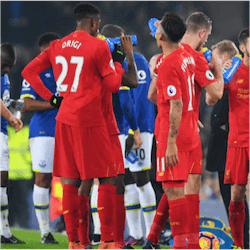 Liverpool’s first game back in the Champion’s League since 2014 did not go entirely according to plan.  Wednesday saw Liverpool taking on Spanish Sevilla in Anfield.  When considering that the basic theme that prevailed had been one quite aptly described as defensive frailty, then the rather anti-climatic result of a 2 – 2 draw doesn’t seem quite so disappointing.

It’s a story of a golden chance wasted.  Liverpool could have owned the top Group E spot after the match against Eduardo Berrizo’s side had it not been for wasted chances and failure to seize a host of opportunities.  Europe is all about taking every chance as it presents itself, something that Liverpool had most definitely lost sight of.  Whether it’s a case of their lack of recent Champion’s League Football experience or their absence from Europe during last season – or even a combination of the two – is anyone’s guess, but the fact remains:  Liverpool will have to regain their balance.

It did not take the Spanish side very long to show that they did indeed mean business.  It had taken Sevilla all of five minutes to take the early lead as home defender Dejan Lovren failed to stop Wissam Ben Yedder’s boot short in its tracks.  Talk about dampening the spirits of the celebrated return of the English side.

In Liverpool’s defence, they did not wait too long before responding in like fashion, with Roberto Firmino finishing off what had been started by Sadio Mane.  A breather for the home team was up for the taking, but forfeited by Firmino when he opted to strike a penalty against the post instead.

The second half saw Georginio come close with a low-drive, but Liverpool were punished instead when they did not add to their advantage by conceding with eighteen minutes of play remaining.  Sevilla too, joined the losing battle after their strong start, this time in the shape of Luis Muriel’s failure to clinch it for the visiting team by shooting wide inside the box in injury time.

All four of the sides playing in Group E are level after the opening round of matches.  Maribor and Spartak Moscow played out a 1 all draw in Slovenia.

Jurgen Klopp had no doubt been hoping for a better result upon his squad’s return to Champion’s League.  Klopp conceded on Wednesday that adding one more defender to the English side would not have made much of a difference to the overall outcome of the match, or to Liverpool’s defensive issues in general.

COVID-19 Likely to Cause Cricket/Football Clash

The most noteworthy collision of the Australian Football season looks likely to come into play after the coronavirus COVID-19 pandemic is behind us. And it will be felt in sports ….

The vast contribution that Europe has made to Australian Football is the subject being celebrated by Optus Sport over the next 100 days, coming to a climax on June 13th ….

James Johnson, the new Chief Executive Officer for Football Federation Australia, has announced his total support to start implementing root-and-branch changes to the game. He wants to see domestic clubs ….

Football Federation Australia is trying to prepare itself for the possibility that it may well lose its biggest sponsor. Hyundai is ready to leave its 15-year long affiliation with the ….

Brighton & Hove Albion Football Club’s Australian goalkeeper Mat Ryan will be donating AU$28 000 to Wires Wildlife Rescue in response to the bushfire crisis in his native country. He ….