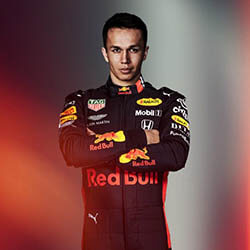 Red Bull’s Alex Albon has been named as their second F1 driver for next year’s season. Red Bull demoted Pierre Gasly to their junior team Toro Rosso in the middle of the season, while promoting 23-year-old Albon for the remainder of the races. Albon had finished in the top six in every race that he has participated in so far for Red Bull, and even outscored team mate Max Verstappen by 19 points. Talking about his promotion, Albon said that he knows how fortunate he is for getting this opportunity, and that he is thankful that the team put their trust in him and believed in his results.

Team principal for Red Bull, Christian Horner, said that there was still plenty of potential to be unlocked for the young driver, who had made his Formula 1 debut for Toro Rosso during this year’s Australian Grand Prix. Horner stated that Alex had performed well since his debut with the team during their Belgium events, and that his results speak for his performance on the track. He added that it’s hard to deny the level of consistency that the player has displayed, along with his reputation as a fiercely committed racer, and that Albon deserves to continue his progress with the team.

Gasly will be remaining with Toro Rosso for the 2020 season, where he will take the mantle of second driver behind team veteran Daniil Kvyat, who has had an otherwise unremarkable year.