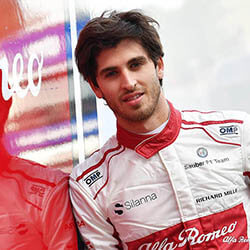 Antonio Giovinazzi of Alfa Romeo is the first driver of the season so far to receive a penalty related to engine changes. The Italian driver is expected to drop a total of 10 players off of the starting grid for the upcoming Azerbaijan Grand Prix after the Alfa Romeo team added a new control electronics box to the car. It’s the third electronics change for the driver in the last four races, and drivers are only allowed two changes before they receive penalties.

This incident is a highlight of the weaker electronics systems that Ferrari are currently dealing with, which has already cost them a victory in 2019. Charles Leclerc of Ferrari was set to make his maiden victory during the Bahrain Grand Prix when he suddenly lost power, which the team later found was caused by a short circuit within the electronics. All Ferrari-engined cars, both from the factory teams and from Alfa Romeo and Haas have begun to make changes to their electronic boxes this season.

And while both Ferrari and Haas made the changes for their last race in China, Alfa Romeo did not follow suit. Giovinazzi suffered the same fault as Leclerc during the qualifying races in Shanghai, but the replacement that was later added for the Chinese Grand Prix was of the first specification. Team mate Kimi Raikkonen are both taking the new control electronics box for their race in Baku with the hope for more reliability on the track.

Australian Grand Prix Will Not Be Affected by Coronavirus

Formula One cars from Italy have already started arriving in Australia and there is no way that the opening Grand Prix event of the racing season will get cancelled, postponed, ….

Russian Grand Prix To Go Ahead

Promoters of next year’s Russian Grand Prix have stated that they are confident that the event will go ahead as planned, despite the country receiving a four-year ban from all ….

Honda has confirmed that will remain with Formula 1 until the end of 2021 after they agreed to a one year extension to its contract with Red Bull, where they ….

Esteban Ocon has officially announced that he will be joining team Renault at the beginning of December, which will take place just after the end of the Abu Dhabi Grand ….

Red Bull’s Alex Albon has been named as their second F1 driver for next year’s season. Red Bull demoted Pierre Gasly to their junior team Toro Rosso in the middle ….