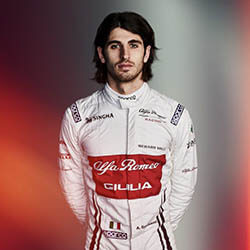 Italian Antonio Giovinazzi will be staying at Alfa Romeo for his second Formula 1 season next year. The 21-year-old driver will be partnering alongside veteran Kimi Raikkonen, who is now heading into the last year of his contract for 2020. The decision to retain the younger driver will probably end the career of Germany’s Nico Hulkenberg for around a year, and the only seat that has yet to be taken is the second Williams alongside George Russell, but it’s expected to go to newcomer Nicholas Latifi.

Giovinazzi, who is currently a part of the Ferrari driver academy, had a rocky start to his firsts season, and there had been some pressure from within the team at one stage for them to take Hulkenberg instead for 2020. Despite this, Ferrari had the final call for the seat through their financial relationship with sister brand Alfa Romeo, and they’ve seemingly seen enough potential in the rookie driver to convince them that he needs to remain for the next season.

The Italian driver had taken some time to find his grounding, but he has since out-qualified Raikkonen four times for the past five races, although he has continued to lag behind the Finn for the championship, having only scored a total of four points for Raikkonen’s 31. Frederic Vasseur, boss of Alfa Romeo, said that the new driver was very quick, even alongside someone as tough as Kimi, and that they expect him to develop further.