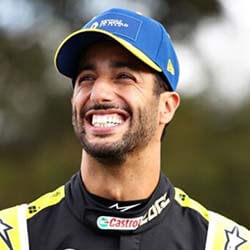 There’s much to be excited about with the 2021 Formula 1 season just around the corner. And especially so, if you’re a fan of McLaren.

When Australian F1 driver Daniel Ricciardo took his new team’s car around the track for the first time earlier this week, there was clearly much to be excited about, with the latest addition to the team pretty thrilled by what he saw.

What he saw was of course the new MCL35M, which made its long-awaited debut on a wet track at Silverstone on Wednesday. It’s also the car the Aussie will be driving as he and British partner Lando Norris, who this year embarks on his maiden F1 season with McLaren, take to the tarmac for the start of new racing year. Ricciardo replaces Carlos Sainz at McLaren this year, with the Spaniard about to make his debut for rival Ferrari this year.

McLaren boss Zak Brown is clearly excited about the Australian being a part of McLaren’s 2021 setup. Brown said earlier this month that Ricciardo and Norris are both out to prove something – to the team, fans, each other, and themselves. With Ricciardo at a stage in his professional career where he’ll be looking to start fighting for a world championship, and Lando no longer a younger brother disappearing in the shadow of his teammate, it will be “all business” for the dynamic duo once it becomes time to move in behind the wheel, said Brown.

McLaren will this year for the first time since 2014 be powered by Mercedes engines again.