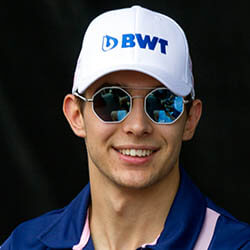 Esteban Ocon has officially announced that he will be joining team Renault at the beginning of December, which will take place just after the end of the Abu Dhabi Grand Prix. Ocon was the reserve driver for Mercedes this season, and was announced the 2020 teammate to Daniel Ricciardo. Before the announcement, it had not been made clear when he would be leaving the team and taking up his new position with Renault. The 23 year old will be driving for his new team at the Abu Dhabi test, and will be taking over the role from Nico Hulkenberg.

Ocon last participated in an F1 event in 2018, which was the second of his two seasons while he was with the Force India Team, which has since changed its name to Racing Point. He had also driven for the Manor team for the second half of 2016, although the team has since shut down. Ricciardo will not be taking par in the Abu Dhabi test while Ocon becomes part of his team and provides feedback on their latest car for this year, while also testing out Pirelli tyres that have been designed for next season.

It remains uncertain as to whether the team will make use of the Pirelli tyres next year, and the goal behind the tests is to test whether they are less prone to overheating, and to learn whether the drivers can push harder during their races next year.