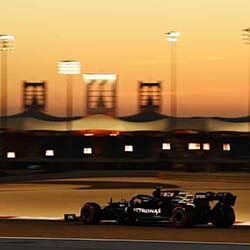 Formula One has been asked to conduct an inquiry into allegations of human rights abuses in Bahrain, and specifically abuses reportedly associated with the upcoming Bahrain Grand Prix.

The inquiry has been called for in a letter backed by an amalgamation of 22 human rights groups and 57 British members of parliament, and was delivered to F1 CEO Stefano Domenicali, all participating teams, the FIA, and current world champion Lewis Hamilton, on Wednesday.

The letter reportedly requests F1 to instruct a commission of independent experts to investigate possible human rights violations as a direct result of the establishment’s activities in the country, citing as a key driver the incident that saw an 11-year-old boy arrested by police for protesting against the November 2020 Bahrain Grand Prix.

According to the letter, the human rights situation in the country has only worsened in recent times, with any semblance of democracy now officially cast into the wind by government in its outlawing of opposition parties.

A Formula One spokesperson has responded to the letter by saying that the sport has traditionally endeavoured to bring different cultures together, and not the other way around, and that excluding any country from being a part of the sport would be tantamount to achieving the exact opposite. Engagement, said the spokesperson, is preferred over isolation.

The Bahrain government last year vehemently denied the “mistreatment” of people within the context of sports-washing, claiming that internationally recognised human rights safeguards had been put into place and were being closely followed. Government has not yet responded to the latest letter requesting an inquiry.