F1 Under Pressure To Address Issues In Saudi 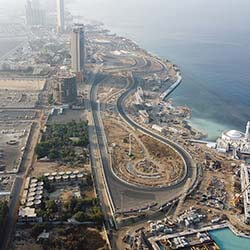 Human rights organisations are reportedly demanding that Formula One act swiftly and decisively to denounce and hopefully mitigate human rights abuses in Saudi Arabia. The sport is currently preparing to race there for the very first time this coming weekend.

F1 has over recent weeks had to stave off accusations of sportswashing for the state. Much of what is currently happening in Saudi Arabia directly contradicts the sport’s commitment to equality, diversity, and social responsibility.

Earlier this week, F1 received separate letters from the Reprieve Group and Human Rights watch – with both outlining several concerns about the sport’s involvement with Saudi Arabia. Also voicing concern are Amnesty International and the Codepink group. The latter has reportedly sent a letter to Lewis Hamilton for raising its concerns about human rights issues in the country. Signed by 41 organisations, the letter requests that the Formula One champion engages with Saudi Arabia’s leaders about the violation of human rights in the state.

While the state has widely publicised its decision of allowing women the right to drive, those women who risked life and limb to help achieve the change remain under suspended prison sentences after nearly three years behind bars. Not only are they not allowed to travel, but they’ve also been prohibited from carrying on their work in human rights activism.

According to Human Rights Watch, Formula One is now in the position to either reject a white washing of the dire human rights situation in the country, or to endorse it.