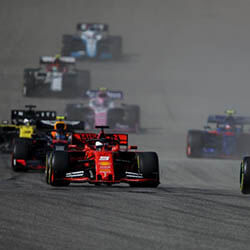 Formula 1 has launched a series of plans to become completely carbon neutral by the year 2030. The hope is to wipe out the carbon footprint produced by the globally famous franchise and the activity that takes place at the racetracks, including air and road transport of both equipment and the staff. F1 has said that it will move to efficient logistics, travel, as well as 100% renewable offices factories, and facilities to try and remove the emissions that cannot be cut, saying that their first step would be to begin carbon reduction projects as soon as possible.

They added that it would make all of their events sustainable by 2025, which includes removing all single use plastics, as well as recycling or composting all other organic materials. And for 2021, a rule has already been put in place that ensures that the petrol used in F1 already has a biofuel content of 10%. The advanced turbo hybrid motors that power the vehicles have been in use since 2014, and are the most efficient engines in the world in terms of the amount of energy that is converted into power, which is known as thermal efficiency, with an F1 vehicle having an efficiency of 50%.

F1 owners had said that they hope to work with the automotive industry to apply the lessons of F1 engines in order to create the world’s first carbon zero hybrid internal combustion engine in the future.