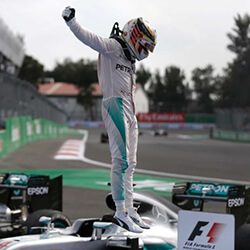 Lewis Hamilton has won the Mexican Grand Prix thanks to a superb performance in a tough fight with Ferrari, and has moved one step closer to a world title. Hamilton will be taking his sixth championship at the US Grand Prix if he’s able to not lose more than 22 points to teammate Valtteri Bottas. Hamilton took the win in a tense, slow race that saw a number of strategies employed between the Ferrari and Mercedes drivers. Sebastian Vettel of Ferrari came in second ahead of both Charles Leclerc and Bottas. The four drivers had closed up in the final laps as they pushed their individual tactics in a bid to cross the finish line first.

The Italian team lost the lead twice, first with a pole position winner Leclerc, who was then pitted out of the position 15 laps in as he was making use of a two stop strategy that had been decided before the start of the race. Vettel took his own strategy onto the asphalt, and had decided to do the same as Leclerc when Hamilton forced him to stop.

Ferrari were given the chance to pit on the next lap and hold on to the lead, but Vettel had suggested that they leave him to it, which meant that the Ferrari team would stop later and try to take back the lead with fresh tyres. Despite the fresh tyres, Hamilton was more than capable of holding on to the lead.