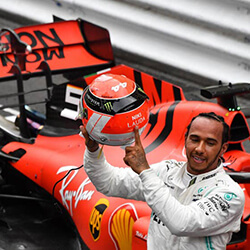 British Lewis Hamilton managed to hold off Max Verstappen and pulled through a late stage collision against the Red Bull Driver to take first place at the Monaco Grand Prix. The world champion was left with a damaged tyre on his Mercedes after they had fit softer rubber than his Dutch opponent at the pit stop during an early safety car period. The problem, it was stated, was that his medium tyres were not able to handle the race well, and Bottas eventually also swapped to softer rubber in the pits.

Hamilton complained a number of times that he was not able to make his tyres last throughout the entire match, but through some management he managed to hold on to his fourth win of the season so far. Verstappen dropped from second place to fourth in the final results due to a five second penalty, allowing Sebastian Vettel of Ferrari to take second while Mercedes’ Valtteri Bottas came in third.

Verstappen’s penalty was ordered due to an unsafe release during a pit stop when the leaders had all pitted for the 12th lap as the safety car was sent out to clear up all the debris that has been left by Charles Leclerc’s Ferrari. And despite Mercedes run of successive victories at the start of the season, which continued with their latest match, their sequence of one twos is now over thanks to Bottas’ mishaps at Monaco. Hamilton is now 17 points ahead in the lead over his teammate for the 2019 championship.