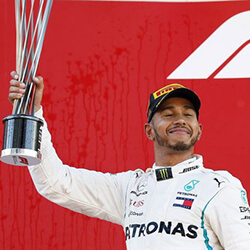 Lewis Hamilton lead the way as Valtteri Bottas followed to a fifth successive Mercedes one-two for the beginning of the season after they won the Spanish Grand Prix. The world champion, who began the race in second place, eventually overtook Bottas during the first corner, and eased into he lead to take an otherwise comfortable win despite a late safety vehicle.

During the race, Ferrari used some team tactics to try and get ahead, but ultimately lost to Red Bull’s Max Verstappen for third place. But the crushing performance for the Italian team hit that much harder after they had hoped that this latest race would see them gain some more ground against Mercedes, who have been dominating every race so far this season, and it’s become a private battle between Bottas and Hamilton.

Hamilton, who now has three wins under his belt to his Finnish counterpart’s two, as well as a point for the fastest lap in Spain, currently leads Bottas by a total of seven points, and Verstappen, who is there closest rival, is behind by 46 points. Vettel is another two behind this, while Leclerc sits at ten points behind him.

Mercedes’ current lead is not far off from two clear wins, with 25 points for a victory, and the massive advantage that they’ve earned in the last few races at a quarter through a season of 21 races shows just how far ahead of everyone else the team is sitting at.