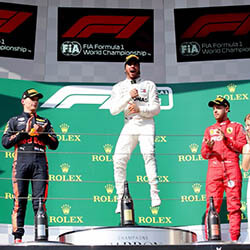 British driver Hamilton claimed his eighth win of the season and put a deadlock on the current championship after a tense battle between the drivers and their strategists for the Mercedes and Red Bull teams. The driver came very close to making a bold move for the lead position near the outside of the 150mph Turn Four.

A gamble by team Mercedes to try and make another pit stop gave the lead driver much quicker tyres for the final stages and he managed to close a 20-second deficit in under 20 laps, passing Verstappen for the lead with three laps left. His latest win puts him 62 points ahead in the season with nine races to go, along with maximum of 234 points available, meaning his sixth title is as good as won.

It was an incredible battle between the greatest driver of this generation, Hamilton, and Verstappen, who is emerging as the leader of the next race, and the first time they had fought for a Grand Prix victory in such a way. The drivers were in a race of their own, with the Ferraris over a minute behind at the flag and Hamilton’s team-mate Valtteri Bottas taken out of contention with Hamilton, and then Charles Leclerc on the first lap, which broke the Finn’s front wing. It ended with stalemate between Verstappen and Hamilton in the first stint, after the Dutch driver had converted pole position into a lead at the first corner