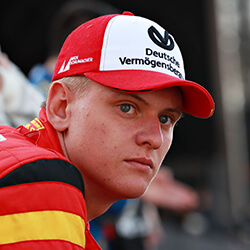 Mick Schumacher, who is the son of seven-time winner and famous racer Michael Schumacher, is set to make his Formula 1 test debut for Ferrari. The 20-year-old German will be driving for the team and the affiliated Alfa Romeo team. Mick signed up to the Ferrari driver academy during the winter months in preparation for his new career.

British Callum Ilott, who is another member of the academy, will also be testing for Alfa Romeo while in Spain. Talking about the new drivers, Ferrari team boss Mattia Binotto stated that Mick and Callum are drivers on their way up and that eh believes driving in official setting such as these upcoming tests can be advantageous for them at this point in their careers.

Their debut will be taking place at official F1 tests that will be attended by all of the teams, with the first taking place at the Bahrain Grand Prix, and the second after the Spanish Grand Prix. Schumacher, who will be making his debut in the Formula 2 feeder series in Bahrain, stated that he is more than excited and would like to thank team Ferrari for the opportunity. He added that is looking forward to the experience, but for the moment, he is putting all of his though into the test, as he would like to focus completely on competing in his first F2 race.

Michael Schumacher won five of his record-breaking titles for Ferrari, as well as the majority of his Grand Prix victories.