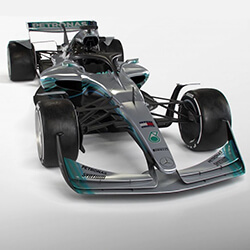 A number of plans to revolutionise Formula 1 in 2021 have been released by bosses of the franchise as the teams prepare for the last few races of the season. New sporting, financial, and technical rules are set to be introduced to try and make the racing more dramatic, while also giving fans a closer view of the action. President of the governing body the FIA, Jean Todt, has said that the rules have ben approved by the World Council, which is the legislative body of the F1. A number of key changes will be implemented, which includes a new aerodynamic concept, along with a $175 million budget. In terms of the new aerodynamic rules, the idea is to create more downforce for the cars, increasing their overall performance.

The current leading teams, Red Bull, Mercedes, and Ferrari, have all stated their opposition of the new rules, believing that they are all fundamentally flawed. But Todt has nevertheless described it as a very special day for their sport, and added that the goal is to have a championship that is both closer and more unpredictable.

Ferrari had initially opposed the rules, and was given the option to veto them within five days. But the veto was ultimately swept aside as they were voted in by the World Council. A statement from the team states that what has been voted is a good starting point, and that they will work together to improve them in the future.