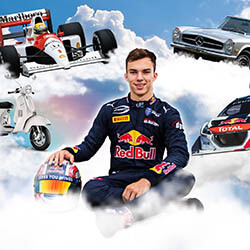 Red Bull has announced that it will be replacing French driver Pierre Gasly with Alexander Albon, a move that will be in place for the rest of the remaining season. 23-year-old Thai Albon has been promoted within the team’s sister outfit to Toro Rosso, and Gasly will be going the other way.

Gasly, who is also 23, is currently sixth in the championship with a total of 63 points, while fellow teammate Max Verstappen is third with 181. Red Bull has stated that they will be using the next nine races to try and evaluate Albon’s performance on the track that will help them decide who will be joining Max for the 2020 season.

Albon’s last outing saw him racing in Hungary, which was the final race before the start of a mid season break. The driver had ended his race in sixth, and was lapped once by Verstappen, who then finished in second place behind world leader Lewis Hamilton. Red Bull’s team principal, Christian Horner, told reporters that Pierre needs to take some time out for the break, and to reflect on the season and his skills, before entering the second half of the year. He added that they desperately need him to start realising that there is more potential to both him and the car.

The next race for the team will be taking place at the beginning of September, and will see the team racing at Spa-Francochamps in Belgium.

Australian Grand Prix Will Not Be Affected by Coronavirus

Formula One cars from Italy have already started arriving in Australia and there is no way that the opening Grand Prix event of the racing season will get cancelled, postponed, ….

Russian Grand Prix To Go Ahead

Promoters of next year’s Russian Grand Prix have stated that they are confident that the event will go ahead as planned, despite the country receiving a four-year ban from all ….

Honda has confirmed that will remain with Formula 1 until the end of 2021 after they agreed to a one year extension to its contract with Red Bull, where they ….

Esteban Ocon has officially announced that he will be joining team Renault at the beginning of December, which will take place just after the end of the Abu Dhabi Grand ….

Red Bull’s Alex Albon has been named as their second F1 driver for next year’s season. Red Bull demoted Pierre Gasly to their junior team Toro Rosso in the middle ….