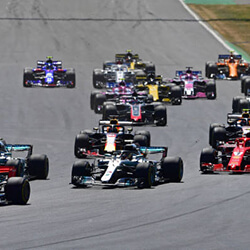 The British Grand Prix has been secured for the next five years thanks to a new agreement between Formula 1 and Silverstone. The latest event was due to be the last to take place at the historic track as it’s contract had been ended over expenses. But negotiations between officials of Silverstone and Formula 1 that lasted 2 years saw bosses of both sides signing in a new deal that’s set to last until 2024.

Chairman of the F1 side, Chase Carey, has described the race at Silverstone as an integral part of the future of the sport. He continued, saying that they have always said their sport must preserve its historic venues, and Silverstone and the United Kingdom represent the history of the sport, dating as far back as 195-.

Director of the British Racing Drivers’ Club, John Grand, stated that Silverstone is among the most iconic Grand Prix venues on the seasonal calendar, and with such rich heritage it would have proven disastrous for the sport had they not able to reach an agreement. Silverstone had been close to singing a new contract last month but paused the deal when the F1 informed the venue of plans to hold the race within London in the next few years. The British Racing Drivers’ Club had been concerned that a separate race within the UK would have lowered spectator numbers and made the Grand Prix less financially viable over the long term.