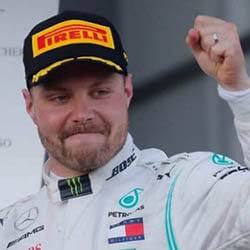 Team Mercedes claimed an all time record for four successive one twos for the start of the season as Valtteri Bottas bested Lewis Hamilton and went on to see victory at the Azerbaijan Grand Prix. It marks the fourth race in a row that Ferrari were unable to unseat Mercedes, and more questions were asked about the Italian’s team strategy in the last few Grand Prix events.

Sebastian Vettel came in third place after staying close behind Mercedes for most of the race, while team mate Charles Leclerc came in fifth place when it looked for a long time as though he would take fourth ahead of Max Verstappen of Red Bull. Lerclerc’s test runs up to that point looked promising, and he was set to dominate the event until an accident in the qualifying rounds lost him a point for fastest lap. The result saw Mercedes as the first team ever to begin the season in a dominant position, and has put their drivers in the lead for this year’s championship.

Bottas had returned to the front, and is leading Hamilton by a point that he was given for his fastest lap time in Australia, while Vettel is currently 35 points behind. Hamilton had closed in behind Bottas for the final two laps, but an error made that saw him run wide in the last corner allowed Bottas to hold on to his lead until the end of the race.