Wolff The Ultimate Believer In Hamilton 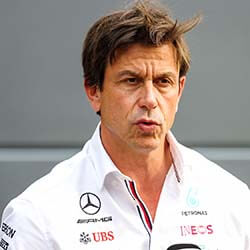 Even though F1 driver Lewis Hamilton now trails a disastrous 19 points behind Red Bull’s Max Verstappen, Mercedes team principal Toto Wolff says he believes the title can still be won by the Brit.

Red Bull’s Verstappen put on a dominating performance at the Autodromo Hermanos Rodriguez in Mexico, which ultimately saw him finishing an incredible 16 seconds ahead of the second-placed Hamilton. With only four races remaining for the season, the Dutchman has managed to considerably widen the gap.

Hamilton admitted after the race that Mercedes had been completely unable to match team Red Bull’s pace, and that more speed had to be found if their chances at another F1 title are to be kept alive.

Wolff, however, seems convinced of the title race being far from a done deal in Red Bull’s favour. He said the very reason he first fell in love with motor racing is that “anything can happen”. Wolff said with four more races to go, there’s four more wins to be taken. The four remaining races will be staged in Brazil, Qatar, Saudi Arabia, and Abu Dhabi.

Wolff said while he’d obviously rather be 19 points ahead than the opposite, that Mercedes is a phenomenal team remains a fact.

With Brazil being the next stage, there’s much in the balance for Wolff and Mercedes. Red Bull have traditionally emerged strong in Brazil, meaning there’s a real chance Hamilton will soon be left with an even bigger mountain to climb.