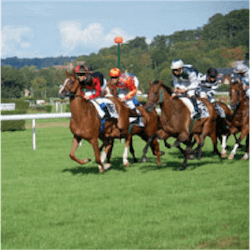 The 1400m Group 2 race, inaugurated in 1978, is restricted to three-year-olds and older and run under weight-for-age conditions, for total prize money of $250,000. It’s a race traditionally paired with the Prince of Wales Stakes at Ascot in October.

However, no horse has won that double since 2009, when Idyllic Prince managed it, and with 2017 Prince of Wales winner Dainty Tess not nominated in the Lee-Steere Stakes field of nine, it won’t be happening this year either.

Five-year-old geldings Scales of Justice and Chocolate Holic are rated too close to call on some online sports betting sites: both are being offered at just above $2.00. Scales of Justice, trained by Lindsey Smith, may have the edge.

He’s on a career record of 19: 9-8-1, and finished second at Flemington and seventh at Caulfield in the two races he’s run since returning from an 11-week spell. However, he finished first of three in a Lark Hill trial on 6 November, and he’s fancied by many punters.

Chocolate Holic, trained by Darren Weir, can’t be ruled out, however. With a record of 15: 7-4-0, he’s raced four times in Victoria since returning from a spell in August, finishing ninth of 10, seventh of 13, second of 14 and fifth of 14. Weir is hoping the change of scenery in Perth brings out his best.

Man Booker is another five-year-old gelding who could challenge, and he’ll be offered at close to the same odds as the other two. Trained by Daniel Morton, his stats are 17: 8-1-1. He came off a long spell last month and finished last of 7 at Belmont Park, then ninth of 11 at Ascot two weeks later, but Morton will be working hard to improve his form for the Lee-Steere.

Italian Andrea Dovizioso has claimed first place at the season-ending Valencia Grand Prix, in a day so laden with heavy rain that 13 other racers were unable to finish. Dovizioso, ….

World champion Marc Marquez has won the ninth race of the MotoGP season after taking first place at the Malaysian MotoGP. Valentino Rossi was the strong favourite to win the ….

In a stunning victory after a previous two weeks of upsets, Marc Marquez shot past his competition to take his winning place at the Red Bull Grand Prix of the ….

The American Grand Prix is well underway, but some of the racers that participated in the event from last year have voiced their concerns over the conditions of the tracks ….

It had been raining heavily for the few days before the start of the Argentina MotoGP Grand Prix, and the track was slick with rain. While it had lightened considerably ….