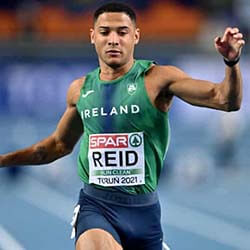 Champion Irish sprinter and 2018 Commonwealth Games bronze medallist has been charged with conspiracy to supply cocaine. The athlete, who lives in Bath, England, is one of 5 men charged with a host of drug-related offences, including money laundering, the illegal possession of firearms, and drug supply and trafficking.

The investigation involving Reid is according to a statement issued by the South West Regional Organised Crime Unit focused mainly on big-scale money laundering, firearms and ammunition and drug-supply.

In addition to the 5 men formally charged, a further 18 have reportedly been released but remain under investigation.

Items confiscated from Reid and co. include a Glock 19 handgun, a silencer, several rounds of ammunition, 3,000 ecstasy tablets, several kilos of crystal MDMA, and a carbine conversion kit.

Reid competed for Great Britain as a member of the European Junior Championships team of 2013, during which tournament he won a silver medal in the 200m event. He has since 2014 chosen to represent Ireland and Northern Ireland instead, and had hoped to represent Ireland at the upcoming Olympics in Tokyo.

Charged along with Reid is fellow-sprinter Romaine Hyman, who remains in custody due his having no fixed place of residence.

Four of the five men charged – including Reid – are due to appear in a Bristol court on May 12. The fifth man is reportedly on the run.

Famed British sprinter Dina Asher-Smith has been given the award for Sportswoman of The Year for 2019 by the Sunday Times. The 23 year old became the very first British-based ….

Dina Asher-Smith stressed why she was seen at the Birmingham Grand Prix as a World Championship medal contestant with an impressive display in the 200 m. The British double European ….

Caster Semenya has confirmed that she will not be returning to defend her World Championship 800m title later this year in September after failing to fight the restriction testosterone levels ….