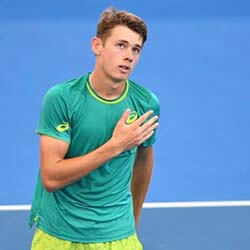 Tennis world No. 32 Alex de Minaur has strongly denied allegations of an investigation into the purchasing of a falsified vaccination certificate. The Aussie men’s No. 1 on Thursday took to social media to insist that his two vaccination jabs were valid.

He addressed the issue on social media after a media report emerged in Spain, where de Minaur is currently based for the European season.

The Aussie said he hoped to clear up the misunderstanding regarding the alleged investigation. He added that he had received his first jab in London in the summer, and the second at Madrid’s Hospital La Paz.

According to a confirmation issued by Spanish police sources on Thursday, de Minaur’s name had been added to a list of athletes and other prominent figures suspected of having purchased the false vaccination certificates from the hospital.

According to the ATP Tour’s mandate, submitting a falsified proof of vaccination carries a punishment of up to $100,000, as well as an immediate suspension from all ATP tournaments for up to three years.

De Minaur had no option but to withdraw from last year’s Tokyo Olympics after testing positive for the virus. At the time, he spoke of having been “shattered” by the news of not being able to compete.

He competed in last month’s Australian Open, where he reached the final round of 16. Vaccination had been compulsory in order to compete in the first Grand Slam of the year.