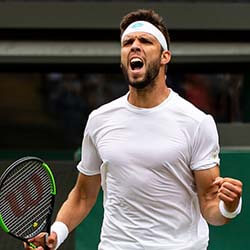 After Novak Djokovic’s run of two years in a row as the No. 1 tennis player in the world, the Serb’s unrivaled success came to a rapid end on Thursday night when he suffered a defeat to Jiri Vesely in the Dubai quarter final.

Medvedev’s rise to the top is a significant change to what fans have seen over the course of 18 years. He will on Monday become the first player other than Roger Federer, Novak Djokovic, Andy Murray, and Rafa Nadal to make it to No. 1 since Andy Roddick in 2004.

What had played a significant role in Djokovic’s drop in rankings had been the 2000 points he had lost as a result of his deportation from Australia and not being able to compete in this year’s Australian Open.

After winning the US Open as well as reaching the final at the Australian Open, Medvedev is indeed a worthy world No. 1.

Djokovic, in the meantime, has spoken graciously when asked about his forfeiting of the title of world No. 1. But the fact that he leaves Dubai with a grim prospect in terms of the immediate future due to his unvaccinated status is no secret.

He confirmed earlier this week that he will not be permitted to enter the US in order to compete in Miami and Indian Wells next month.