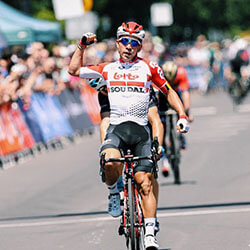 Australian Caleb Ewan has withdrawn from the Giro d’Italia after he won the second stage of the race. The rider, who is part of Lotto-Saudel, had come first in the stage 11 with a spring finish just ahead of Pascal Ackermann and Arnaud Demare to add to his win during the eighth stage. But the sprinter has now officially withdrawn from the competition with just 10 days remaining as he prepares for the Tour de France, which is set to start at the beginning of July.

Talking about his withdrawal, Ewan stated that it makes sense for the sprinters to leave the event earlier, and that from now on, all of the stages are tough, and not well suited for sprinters. He continued by saying that he was happy that he had attended the Giro, and that it was the succession of long and challenging stages that had done him well in terms of condition. The Australian rider continued, saying that he entered the Giro with the hope of winning at least once stage, and that two was more than he had expected, and that he was happy with the way things had panned out n the end.

Italian Valerio Conti remains in the lead with a pink jersey, and has an advantage of one minute and 50 seconds over next in line, Primoz Roglic. British Hugh Carthy is four minutes and 36 seconds behind the lead in 16th, followed by Simon Yates at 24th.