Cavendish And Family Robbed At Knifepoint 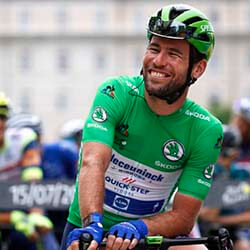 England Olympic cyclist Mark Cavendish, his wife Peta, and the couple’s two young children were during the early hours of Nov. 27 attacked by armed burglars at their family home in Essex.

The couple say they were robbed at knifepoint and feared for their lives as well as the lives of their children.

According to police, the cyclist was assaulted by four intruders. Cavendish was at the time recovering at home after a time spent in ICU following a track event crash in Belgium. Officers have described the assault as a “targeted” attack.

Cavendish has in the meantime called on anybody with information about the attackers to come forward. He said the incident has left the family in a distressed way and that they’re now suffering from the after-effects of the trauma. He said nobody should ever have to suffer the sort of violence and threats the family had been put through.

Officers investigating the case have confirmed that the robbers made off with two watches and a Louis Vuitton suitcase. The family, though extremely traumatised, sustained no life-threatening injuries during the robbery.

According to DI Tony Atkin, who is the senior investigator working the case, the investigation is now moving along at a pace. Images of those involved in the burglary have also been released in the hopes of a positive identification.

Atkin also acknowledged the fact that the incident will have caused a great deal of concern within the Essex community.

The unstoppable Dame Sarah Storey has proven her worth for British cycling once again. Storey on Sept. 2 beat exceptionally treacherous conditions on the foothills of Mount Fuji as she ….

British Cycling In The Steroids Spotlight

British Cycling has pledged its commitment to co-operating with the World Anti-Doping Agency (WADA) as it investigates allegations surrounding a previous investigation into an “abnormal” drug test by a British ….

The former British Cycling and Team Sky doctor accused of having ordered performance enhancing testosterone in a recent controversial ruling by a Medical Practitioners Tribunal, claims he’s not once in ….

Aussie-based cycling team Mitchelton-Scott will this year for the first time in the squad’s 8-year history ride the Tour de France without a single Australian rider in the mix. This ….