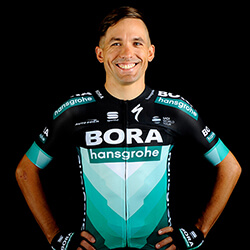 Cesare Benedetti has come first in stage 12 on the first day of the Alps in the Giro d’Italia, while Slovenian Jan Polanc will be taking the overall race lead. Italian Benedetti claimed his first victory of his career after he was part of a long range breakaway group on the difficult 158ikm ride that took them from Cuneo to Pinerolo. Damiano Caruso finished in second place, while Irish Eddie Dunbar finished the day taking third place.

Polanc claimed the lead from UAE Emirates teammate Valerio Conti, while Slovenian Primoz Roglic is now holding second place. British rider Hugh Carthy, who is 24 years old, is the new leader of the riders classification in 10, and is followed by Adam Yates who claimed to 12th overall after he finished in a group that finished off just eight minutes behind winner Benedetti, but alongside his general classification opposition riders.

The top three were part of a 25-man group that broke out ahead as soon as they had left the starting point in Cuneo. Not long after the group had split up to take on the imposing uphill of the Montoso in the latter half of the stage, eight riders had regrouped for their descent down. Gianluca Brambilla, Dunbar, and Eros Capecchi had pushed through and cleared on the final climb, but slowed down enough for the run in that they were eventually caught, with Benedetti making a sprint finish to the end.