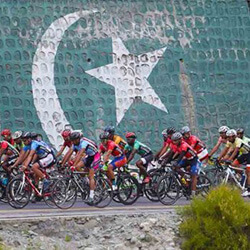 Coming to an end 5000 metres above sea level and after many hundreds of kilometres through snowy peaks and glaciers, the latest international cycling race from Pakistan will present a new challenge from cyclists that want to climb the roof of the world.

The Tour de Khunejerab, a name that was inspired by its much more famous French counterpart, is still a few years from being quite as popular as the Tour de France, but with their claim of it being the highest cycling race in the world, it may begin to attract more athletes as time wears on.

88 riders from around the world, which included teams from Sri Lanka, Spain, Afghanistan, and Switzerland, took part in the second edition of the event. Less than half of those managed to make it to the finish line. The race consists of four separate stages that range from 68 to 94 kilometres, including a shorter time trial, which is much shorter than most other events. But what sets this apart is the sheer elevations: the Pakistani race will begin at 1500 metres above sea level and will continue to clime into the mountains.

The final day of the event saw cyclists begin at 2800 above sea level, and ride forward until they reach the end at 4700 metres, which is over 100 shorter than Mont Blank, the highest mountain in Europe. The country is hoping the race will attract more athletes in coming years.