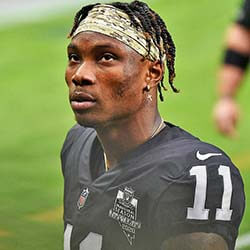 NFL receiver Henry Ruggs was driving his sports car at more than 150 mph while twice over Nevada’s legal limit for blood-alcohol when his vehicle crashed into the year of another, killing its 23-year-old occupant. This according to a statement by prosecutors earlier this week.

Ruggs was released by the Raiders on Thursday. If convicted on felony charges of driving drunk and reckless, which action has resulted in the death of another, Ruggs could face up to 26 years behind state prison bars. The NFL star has not yet entered a plea – pending formal charges that have yet to be filed by state prosecutors.

The name of the woman who died in the crash has not yet been made public. She was at the time of the incident driving a Toyota Rav4. According to property records, Ruggs, who was accompanied by the mother of his young daughter at the time of the accident, owns a property not too far from where the slamming occurred.

According to information confirmed by Nevada prosecutor Eric Bauman, Ruggs’ corvette reduced speed from 156 mph to 127 mph shortly before ramming into the rear of the Rav4.

Not boding well for the former Raiders receiver is Judge Joe M. Bonaventure’s statement that he has not encountered a crash involving such an incredibly high speed since he first became a judge.

Ruggs, who was released on $150,000 bail, and under strict conditions, will next appear in court on November 10.