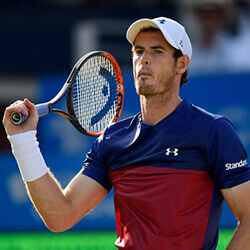 Scot Andy Murray, who is considered a top fan favourite in tennis, has been handed a wildcard entry to the 2022 Australian Open.

This means the five-time runner up and former world No. 1 will make his first AO appearance in three years. Murray last played an emotional Australian Open in 2019.

Tournament director Craig Tiley, who announced the entry, said Murray remains a worthy beneficiary of such an entry even despite his current 134th position on the sport’s world rankings. Murray, despite several potentially career-ending hip surgeries, has emerged a tenacious hanger-on in his ongoing push to revive his former glory.

Tiley said Murray has had endless “memorable moments” at the first Grand Slam of the tennis year. The five-time finalist is known for his incredible fighting spirt and his passionate love of the game, he explained. Tiley said he’s for this reason absolutely delighted to welcome Murray back to the January event in Melbourne.

Murray, during his commentary on the wild card entry, said he’s thrilled to be about to be back to play another Australian Open. He expressed gratitude to Tiley and the rest of the organising team for the enormous opportunity afforded to him.

The 2022 Australian Open will run at Melbourne Park from January 17-30.