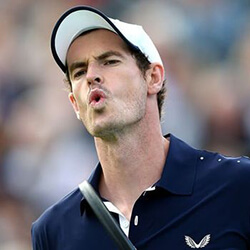 British Andy Murray will be returning to this year’s Wimbledon to play in the doubles with French Pierre-Hughes Herbert six months after he underwent hip surgery that helped save his career. 32-year-old Murray, who has won twice at Wimbledon, had the surgery earlier in the year, and made a winning return with Feliciano Lopez at Queen’s.

Murray is set to place mixed doubles at Wimbledon, but has not yet officially finalised who is partner will be. Talking about the upcoming event, Murray told reports that Herbert is a brilliant doubles player, and that he hadn’t planned on playing doubles at Wimbledon this year, but in the last couple of weeks had spoke with his coach and they both agreed that it would be a good opportunity. He added that he will be entering the tournament with low expectations.

Murray has chosen a strong doubles partner in Herbert, who has won all of his Grand Slam doubles titles./ The British player relished playing alongside Lopez at Queen’s as the pair took a straight set victory over Colombian top seeded Robert Farah and Juan Sebastian Cabal.

Murray added to his statement, saying that he is enjoying playing now after learning to walk again from his injury. He said that he wasn’t able to physically extend his led for the last 18 months, and his walking gain was terrible and that he wasn’t limping because he wanted to – ending by saying that he no longer feels discomfort.