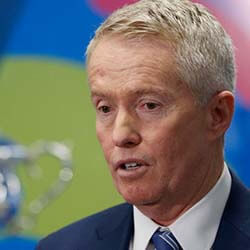 Australian Open big boss Craig Tiley says the six positive cases of infection reported so far among international arrivals did not take the organisers of the event by surprise. Organisers expected some cases among players as well as support staff, said Tiley, who described the number of confirmed cases as “low” given the roughly 1,200 tests carried out over the past five days.

Tiley on Tuesday told a prominent news network that a situation of no-training lockdown for some players, while others, including Novak Djokovic and Rafael Nadal, are free to practice, now meant the start to a Grand Slam commencing on February 8 was no longer an equal or even playing field. Players in lockdown in Adelaide aren’t prohibited from training due to the province’s forgiving restrictions.

Tiley did however add that organisers were determined to play their part in evening out the playing field as far as legally possible. He however rejected a request received from some men’s players calling on a shortening of Open matches from best of five sets, to best of three.

The AO boss also defended controversial world No. 1 Novak Djokovic’s appeal to organisers to ease some of the current restrictions, which Tiley said was presented in the form of a note containing suggestions, and not demands being made. Tiley said Djokovic was sympathetic towards the current restrictions put into place by Victoria’s government, and just like every other player competing in this year’s tournament, understood what two weeks of potential lockdown restrictions could potentially mean in terms of training and competing.