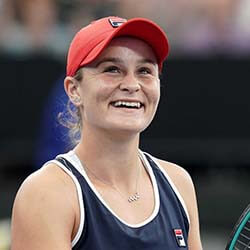 Ash Barty is looking forward to the Adelaide International professional Tennis tournament but refuses to rush around hustling points to hold on to her no. 1 ranking. The gifted 24-year-old player from Queensland will next be seen defending her title at the Memorial Drive Tennis Club, fresh off her defeat in the Australian Open quarter-finals.

Nobody played much Tennis for most of last year, which is partly why Barty is still 1 000+ points ahead of the two-time champion of the Australian Open, Naomi Osaka. The 23-year-old from Japan has won 4 of the last 9 Grand Slams she played in after the Women’s Tennis Association adjusted its system last year.

Barty didn’t catch Oskaka’s victory at Melbourne Park on the 20th of February, however, and has revealed that her health and safety and that of the people she works with will be her main priority in 2021. She added that she refuses to look at the situation she’s in as one that calls for her to defend points, saying that this is a negative perception she doesn’t need.

Barty revealed that although she’s planning the next 12 months to the best of her ability, the current situation globally has made it impossible to be sure about anything. She said that she’s following the advice she’s being given and putting her faith into the fact that the correct protocols are being followed at all times.

She added that the prospect of a rivalry with Osaka, who has nominated herself as the player everyone has to beat, has not even entered her mind.