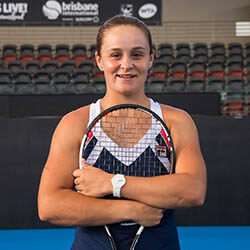 While no award had been made in 2020, Barty has managed to hold on to her position at the top of the women’s game following a year that saw her take an incredible five titles – including her second Grand Slam singles trophy at Wimbledon.

Crowned the men’s equivalent on Thursday had been world No. 1 Novak Djokovic, who had been denied a calendar year Grand Slam in the US Open final by Daniil Medvedev. Djokovic nabbed 3 Grand Slam titles this year: Wimbledon, the Australian Open, and the French Open at Roland Garros.

Crowned the ITF’s Quad Wheelchair World Champion for the third year in a row had been Aussie wheelchair player Dylan Alcott. He won all four Grand Slams this year – as well as Paralympic singles gold in Tokyo.

Barty’s victory sees her joining a top list of multiple winners of the famous award, which has been handed down since 1978. Winning the prestigious award a record seven times had been Steffi Graff, who is joined on the all-time list of winners by six-time awardees Serena Williams and Martina Navratilova, three-time winners Martina Hingis, Justine Henin, and Chris Evert, and two-time award winner Monica Seles.