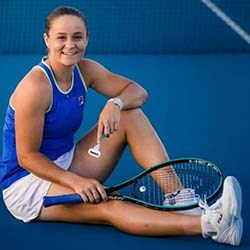 World number one Ashleigh Barty is living the tennis dream as she prepares in perfect fashion for this year’s French Open.

The Aussie recently defeated match favourite Shelby Rogers 7-6, 4-6, 6-4 in the third round of the WTA clay court tournament in South Carolina. Barty has now won an impressive eight straight matches in a row, which sees her make it through to the quarter finals where she’ll be facing it off with Paula Badosa of Spain.

Barty following Thursday’s big win described Shelby to be a phenomenal ball-striker, and a player who works hard for every single point scored during every single match she competes in.

The Australian suffered through three exceptionally harrowing sets and more than two hours’ worth of sweat-and-play before eventually overcoming the home-grown contender.

Barty arrived at the tournament boosted by a Miami Open title – a prestigious and coveted trophy successfully defended by the Ipswich-born Australian. The switch between surfaces has been something to get used to, she said following Thursday’s stunning victory.

Unseeded world No. 91 Danka Kovinic has in the meantime beaten two-time Wimbledon star Petra Kvitova, currently seeded third, by reaching the quarters off a 6-4, 6-4 win. Kovinic will next fight for a spot in the semi-finals once she goes up against Yulia Putintseva from Kazakhstan. Putintseva advanced to the next round when she trumped number 6-seed Garbine Muguruza. The sixth-seeded star was forced to retire early from the match against Putintseva owing to a left leg injury.