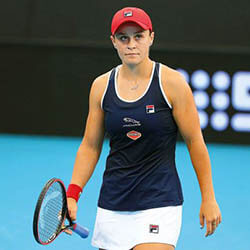 Aussie tennis star Ash Barty’s decision to withdraw from this year’s US Open over health risks posed by travelling to New York may have unleashed a wave of applaud and admiration on the local front, but the same can unfortunately not be said for tennis fans living in the United States.

Fans are obviously afraid of the US Open losing its shine and popularity. And the fact that not only Barty, but also several other top players recently announced having opted out over similar health-related concerns, has only served to push American emotions even further into the red.

It in the end came down on the shoulders of American tennis writers to calm the masses. Writers like Sports Illustrated’s Jon Wertheim, New York times tennis correspondent Christopher Clarey, and popular freelance journalist Nick McCarvel all defended Barty’s decision to withdraw, hailing her decision as commendable and, perhaps most importantly, hers to make and therefore one that should be respected by the international tennis community.

Barty on Thursday announced her decision not to compete in this year’s US Open, which is set to begin on September 1. She described the decision as one made in consultation with her team. In addition to the US Open, Barty will also steer clear of this year’s Western and Southern Open – which is also scheduled to be played in New York, and to commence on August 20.

Men’s tennis legend Andy Murray says he’s not in the least bit surprised by Barty’s decision and that based on what he’s heard, he expects several top male players to follow suit.