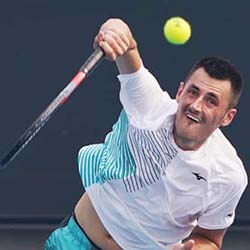 The former world No. 17 immediately after the match that saw him only just squeeze into the Australian Open went full-on nuclear on members of the media upon being asked whether he still aspired to achieve great things in tennis. He was out there risking his life and health by having flown to Doha, said the 28-year-old before ordering reporters not to ask “questions like that”.

The Australian, who has dropped back from world No. 17 to a current ranking of No. 228 following a 2011 quarter-final Wimbledon run, clearly wanted to send out quite the message to his critics, who he said in so many words had been unfair towards him for going on a decade. He also went on to tell journalists that no matter which way they preferred to spin the story, the fact that he had just qualified for a Slam could not be escaped or ignored.

The Aussie will undoubtedly be looking to breathe new life into his career; especially since his massive plummet from a playing raking among the world’s top 20 to where he’s currently seeded on the points order. Tomic was one of 11 Aussies trying to grab one of the 16 qualifying spots for the Australian Open at the Doha tournament.

Fellow-countryman Dane Sweeney will unfortunately not be joining Tomic after he made it through to the final round of qualifying at Doha only to lose to Ukrainian Sergiy Stakhovsky.