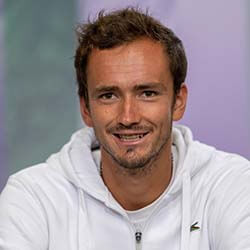 World No. 2 Daniil Medvedev proved so incensed by a question regarding cheating and the infamous Russian Olympic doping scandal that he recently insisted on the removal of a journalist from the tennis competition at the Tokyo 2020 Games.

The incident took place following the Russian tennis star’s three-set victory over opponent Fabio Fognini at Japan’s Ariake Tennis Park – a meet that had Medvedev struggling his way to the win through extreme afternoon head and humidity.

Medvedev initially misunderstood the question by the journalist while immediately jumping to all manner of personal-onslaught conclusions. While the journalist tried his best to explain the meaning behind the question, the Russian tennis star clearly wanted to hear nothing of it. He then went on to insist that the journalist be dismissed from covering Olympic tennis games, while pointing out to a press officer that he did not wish to encounter him during any future interviews with the media. Medvedev also pointed out to the journalist that he should be embarrassed (for asking the tennis star questions about Russian doping).

All athletes from Russia are this year competing under the oversight of the Russian Olympic Committee – this following several doping scandals involving the country in recent years.

Russian athletes are furthermore competing under certain conditions and restrictions. These include not being permitted to wear or carry Russian flag-branding on their clothing or kit and not being at liberty of hearing their country’s national anthem being played during the handing out of medals at official Olympic ceremonies.