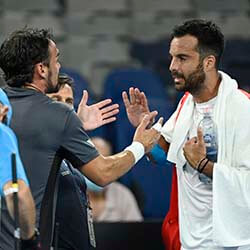 So nail-biting a thrill did Italian stars Fabio Fognini and Salvatore Caruso’s five-set AO duel on Thursday turn out to be, that the pair took the fight off the court after arguing over the net and wagging fingers at one another after the match.

The harangue flew this way and that after Fognini’s incredible comeback from 1-5 down in the fifth set tiebreak to not only claim it in convincing fashion, but also bringing the 3-hour and 56-minute fight to an end as he secured his place in the third round of the tournament. So heated did the argument become, that even after the losing party had taken his seat, Fognini still felt the need to approach him and continue the wild words and gesturing.

The two eventually had to be separated physically, as it had become clear that theirs was an argument that wasn’t about to simmer down to a boil of its own accord.

It later emerged that the two countrymen had bickered about the fact that Fognini had during the match implied that his opponent had been nothing more than lucky. And according to tennis journo Luca Fiorino, more than one expletive had been sent flying about as the two argued about who had been lucky and who had earned their points fair and square.

There certainly wasn’t any love lost between the two after the fifth set alone dragged on for an exhausting 85 minutes before Fognini eventually got to celebrate his 4-6, 6-2, 6-3, 7-6 win.