Kim Clijsters To Return To Tennis 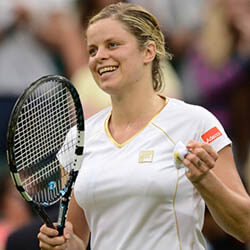 Kim Clijsters has decided to make a tennis comeback at the age of 36, where she will be retuning to play at the WTA Tour of 2020. The Belgian, who had retired in 2007 to begin a family, has stated that she feels inspired by other mothers such as Victoria Azarenka and Serena Williams. The player, who was once the number one player in the world, returned to the sport initially in 2009 and went on to win three Grand Slams before she retired once again in 2012.

As a former world number one, the player is eligible for unlimited wildcards at any WTA tournament, but she will still need to play three tournaments or claim 10 ranking points in order to establish herself in the ranking list. She has stated that not being forced to a play a certain number of tournaments per year has made her return to the sport a little bit easier.

Clijsters won 41 WTA titles before she retired for the first time, and held the rank of world number one for a total of 20 weeks. Her daughter, Jada, was born in 2008, and was followed by sons Jack and Blake, who were born in 2013 and 2016 respectively. The player has said that she won’t play anything similar to a full season, as she does not want to be away from her family for more than a few weeks at a time, and will most likely be most active during school holidays.