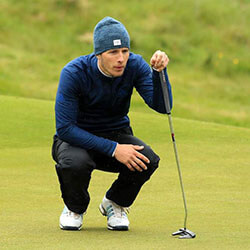 British Matthew Jordan fought through rainy conditions to claim a course record 63 for a two shot lead during the first round of the British Masters that was played at Hillside, Southport. The 23 year old, who is participating in only his 12th tournament as a professional player, sunk a total of nine birdies and finished on nine under par, while fellow Englishman Matt Wallace and Swedish Marcus Kinhult both completed the first round on seven under.

Lee Westwood and Scot Richie Ramsey now sit in a group just one shot behind. Talking about his record, Jordan said that he had tried to shoot as low as he could, and that he began to realise he was doing well because more people were coming to watch and there were more cameras. He added that he was nervous for a few holes, around the 11 and 12, and then he managed to settle in and carry on playing.

Jordan, who comes from nearby Hoylake, registered his best result so far as a professional during a Challenge Tour event that was held in Turkey, where he completed the game in a second round 62 and ended the day in seventh place. Tommy Fleetwood, who hosted the tournament, was behind the lead by five shots on the course after opening with a 68, and said that he had known Jordan for a long time, and that they all know what the young player is capable of.