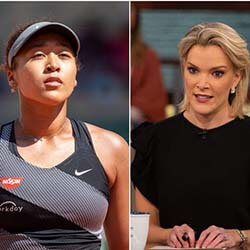 Tennis sensation Naomi Osaka has found herself in the firing line after appearing on magazine covers. While this seems like a silly debate, the issue has arisen because of the tennis star announcing she would be taking time out of the spotlight. Megyn Kelly called out the star for what could be described as double standards.

Osaka had previously announced that she will be withdrawing from the French Open in May but refused to speak to the media about it, although she cited depression and anxiety as the reason for withdrawing.

Kelly criticised the star for gracing the covers of several magazines including Time Magazine, Japan Vogue and Sports Illustrated – despite having said that she’s taking a break from the spotlight. In addition to this, Osaka has her reality show and Barbie even though she had labelled herself an introvert. Of course, Osaka took to Twitter to defend herself and so the great war began.

Osaka responded saying that the covers had been shot last year, long before the drama of the French Open. She then decided to take fire at the journalist, claiming that she should have done her research before spewing negativity on social media. She then blocked Kelly on Twitter.