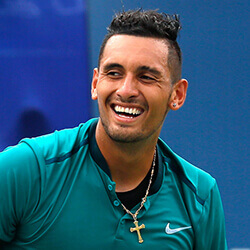 This year’s delayed French Open will be going down without the entertaining talent of Aussie tennis star Nick Kyrgios. The 25-year-old has been displaying a recent tendency to withdraw from tournaments, and so his decision not to compete isn’t a surprise to the tennis world.

Adding to the motivation to withdraw will likely have been that the Aussie prefers fast-paced surfaces – not to mention his largely historical no-show act at Roland Garros. Kyrgios has furthermore been shying away from tournaments ever since the outbreak of the global health crisis early last year. He hasn’t competed in any notable international event since he got beat by Dominic Thiem in the third round of the 2021 Australian Open.

During a post-match session with the press, the Aussie expressed uncertainty and even slight indifference regarding what the near future will be most likely to hold for his career. He said his own path forward will all depend on how the situation with the global crisis unfolds. He also spoke of not enjoying playing in front of empty stadiums. Kyrgios said he saw no use in going to extreme lengths to play tennis with no fans present in stands.

The French Open will this year be played roughly a week later than its usual timeslot – a delay that is now having an effect and impact on several other prominent WTA and ATP tournaments. Many tournaments have in fact decided to move their own schedules to as to fit in with that of Roland Garros.