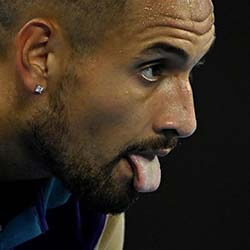 Aussie Nick Kyrgios has said he thought tennis world No. 1 Novak Djokovic to be somewhat of a “strange cat”. The pair’s gripe with each other continued on the opening day of this year’s Australian Open, which got underway on Feb. 8.

Kyrgios’ statement came in response to the Serbian having said on Sunday that he had no respect for the Aussie off the tennis court after his criticism voiced in response to how he felt Djokovic had been handling the global health crisis so far. Kyrgios took specific issue with an exhibition event organised by the Serbian in the summer. The event paid no regard to physical distancing and ultimately led to several of the competing players becoming ill after partying it up at a nightclub.

The Australian also lashed out at Djokovic after the latter during the run-up to the AO drew up a list of special requests he felt players deserved to have while stuck in their hotel rooms in preparation for the big event.

Kyrgios and Djokovic both got their AO campaigns off to a victorious start. Kyrgios beat Frederico Ferreira Silva, and Djokovic on his part stuck it to Jeremy Chardy in straight sets.

The outspoken Australian on Monday said he considered Djokovic’s statement of “no respect” to be a strange comment, as the pair did not really know each other away from the court. Kyrgios added that had Djokovic taken issue with some of his (Kyrgios’) own past antics on the tennis court, he would have better understood the Serbian’s comment.

Djokovic on Monday appeared in everything but the mood to discuss his feud with the Australian.