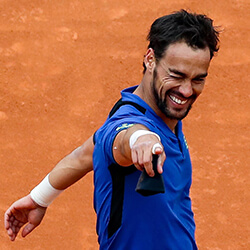 Rafael Nadal managed to push through an early game scare while playing at the Barcelona Open as he rebounded from a set down to beat Argentinian Leonardo Mayer, and earned his place among the last 16. Nadal, who is aiming to win the tournament for the 12th time, worked hard for his latest victory of 6-7 6-4 6-2 as the world number two narrowly avoided a surprise loss ahead of the start of the French Open.

Fellow Spanish player David Ferrer is now set to face Nadal in the next round of the Open, with both fighting for a spot in the quarterfinals. Nadal has won every match against Ferrer except the last four, and as it stands their upcoming game could go either way. Mayer, who is ranked 63rd globally, has never been able to best a top five opponent in his last 15 attempts, but seemed to be more than a match in their opening set, where Nadal seemed nervous.

Nadal will be hoping to claim title number 12 at Roland Garros, and if he manages to pull it off, it’ll give him plenty of breathing room after the 17 time major champion was forced to make an early exit while playing in the Monte Carlo. A ba game gave Nadal the chance to break to love at 4-3 for the first set, but Mayer didn’t waste time as he countered for 5-5 and held on for a tiebreak.