Rafael Nadal Into Third Round of Madrid Open 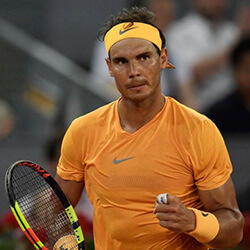 Rafael Nadal has advanced to the third round of the Madrid Open after he defeated Canadian teenager Felix Auger Aliassime 6-3 6-3. The world number 2 won the first break point of the game before claiming an otherwise tight first set. His 18-year-old opponent, Aliassime, saved five of his own match points thanks to a serve during the second set by Nadal took the sixth and won the game outright. Nadal, who is aiming to grab his sixth Open Madrid Title, is expected to take on American Frances Tiafoe in his next upcoming match.

The Spanish player has yet to win a single title so far this season, and entered the tournament after defeats at the semi finals of both Monte Carlo and Barcelona. Talking about his recently losses, Nadal stated that he had been having a tough few days due to his stomach virus, but that Felix was a good opponent, and that one day he will be a champion.

Compatriot Spaniard David Ferrer’s career at the tournament came to an end after he lost the second round stage of 6-4 6-1 to third seeded Alexander Zverev. The 37 year old shared a friendly moment with the German player at the end of the match before he addressed the audience that were present at the Manolo Santana Court. For the men’s doubles, Jamie Murry and Bruno Soares advanced tot he quarter finals thanks to their latest victory.