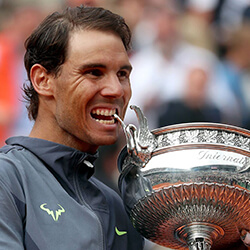 Rafael Nadal has won his 12th French Open title after beating fourth seeded Austrian Dominic Thiem in four sets. The Spanish player has won for the third straight year while playing on Roland Garros thanks to a high quality final that saw him end the match with 6-3 5-7 6-1 6-1.

The 33 year old player is now the first to win 12 singles titles at the Grand Slam event, and has won 18 majors overall so far in his career. Talking about his win, Nadal told reporters that he can’t explain what he’s achieved and how he feels, adding that it’s a dream for him. He continued by saying that he never thought when eh started in 2005 that he would still be here, and that it was a special moment for him.

It now leaves the player two Grand Slam wins short of Swiss Roger Federer, who he bested during the semi finals, and three behind Serbian world number one Novak Djokovic, whose campaign to hold all four majors was put to an end thanks to Thiem. The second seeded slit to his win after he claimed victory with a second match point, lying behind the baseline after winning with his arms outstretched.

Covered in clay, the player climbed up and faced the Roland Garros audience that have grown used to seeing Nadal win. 25-year-old Thiem suffered his second Grand Slam loss after he lost in three sets to Nadal last year.