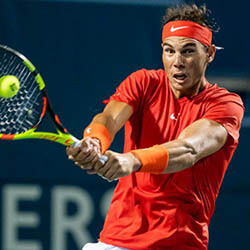 Rafael Nadal was able to retain his Rogers Cup title thanks to a one-sided victory against Russia’s Daniil Medvedev. Spanish Nadal, who has won 18 Grand Slam titles throughout his career, finished the match up a 6-3 6-0 win in one hour 10 minutes in Montreal for his fifth crown in Canada. The win secured his 35th Masters 1,000 tournament victory and it marks the first time he has defended a non-clay title.

Talking about his latest win, the 33 year old told reporters that he felt that he played a solid match, and that it had been the best match of the event without a doubt. He added that it was important that he was back on hard courts and to win a big title, saying that it was about enjoying the win above all else.

Medvedev, who is eighth seeded, spurned a break point in the opening game of the match and was forced to pay for the missed chance after losing his serve as Nadal went 3-1 up. The rest of the first set remained on serve, with world number two Nadal once again getting through a break point. Medvedev, who beat two top 10 players as he worked to the final, lost his momentum in a second set in which he claimed four double faults, sending a backhand long on Nadal’s first match point. In total, world number nine Medvedev committed 22 unforced errors through the match.