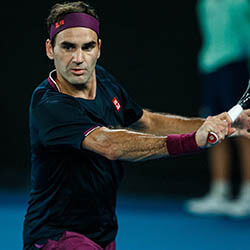 Even though fans will be disappointed to know Roger Federer will likely miss out on a second Australian Open in a row in January 2022, the Swiss master’s coach has now described fears over a sudden retirement to be “unfounded”.

Federer, who has played in only 13 matches in 2021, is said to be making a slow and sluggish recovery from a third surgical procedure performed on his knee in 18 months.

The Swiss goat last played at Melbourne Park in the semi-final of 2020, when he made a record 15th appearance. He spent nearly a year on the sidelines after that particular stunt.

According to a comment made during a recent interview by long-time coach Ivan Ljubicic, Federer, who turned 40 in August, will be back on the court some time next year. Ljubicic said although a 40-year-old body takes time to recover, Federer continues to undergo rehabilitation as he makes a slow but steady return to the court.

But even though Federer’s anticipated absence at next year’s Australian Open will come as no surprise, it remains a massive blow for tournament organisers. They had been hoping on a return of the sport’s “big three” – Federer, Rafael Nadal, and Novak Djokovic – to the 2022 edition of the event. While Nadal has signalled the likelihood of a return, Djokovic’s participation remains a thing of uncertainty.

The world No. 1 has refused to confirm whether or not he has been vaccinated and has said he’s not yet ready to say either yes or no to the 2022 edition of the event.

Australia’s Ash Barty has secured her spot among tennis’ elite. She’s only the fifth woman to finish three consecutive years as world No. 1. Even though Barty hasn’t competed for ….

British youngster Emma Raducanu will later this month compete back home in England for the first time since her glorious US Open win. She’ll be facing Elena-Gabriella Ruse at the ….