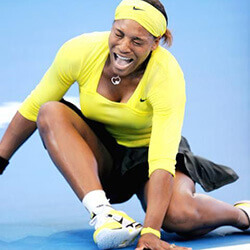 Tennis legend Serena Williams is making headlines for the second time following the shocking announcement that she will be missing the Olympics this year. Following an ankle injury during her first-round match against Aliaksandra Sasnovich had been forced to quit the tournament.

Williams had dreams of securing another Grand Slam victory at this year’s tournament by winning her eighth singles title. Unfortunately, she slipped during the first match and had to seek medical attention for an ankle injury – in addition to another injury requiring strapping on her right thigh before the match. She returned to the court shortly thereafter to announce that she had called it quits and walked off heartbroken and in tears. The crowd gave her a huge round of applause following the announcement.

This is the first time that Williams has ever had to quit during the first round of Wimbledon. She released a statement on Instagram to discuss this and avoided the post-match press conference. In her statement, she thanks fans for their love and support during this time.

Williams is not the first person to slip on the court, with Novak Djokovic slipping a few times during his match. Adrian Mannarino also had a fall during his match against Roger Federer.

The tennis world has labelled the incident difficult to watch as it stunned the world as the emotional legend left the court. More so because she had to wait two years to make her official comeback. It is believed that she would have had a fighting chance of winning a title, her first since 2017.

Beechworth Lawn Tennis Club has taken to the courts following a skewed approach to grand dispersals by Sport Australia. They are challenging the validity of the $500,000 grant they applied ….