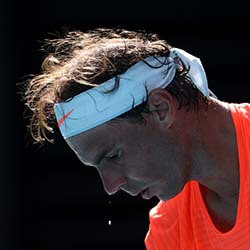 Tennis legend Rafael Nadal’s withdrawal from next month’s ATP Mexico Open scheduled for Acapulco is now rumoured to be the result of the competition’s inability to afford the star player’s extravagant “appearance fee”.

The Spanish legend and event’s defending champion announced late last week that the reason for his withdrawal had been that of his wanting to fully recover from a back injury. But reports on the weekend alluded to the possibility of there being more than “recovery” behind the sudden withdrawal. A more likely explanation is that tournament organisers weren’t this year in a position to offer Nadal his asking price, which in some circles are rumoured to be as high as $1 million US dollars for men’s high-profile events.

If the Spaniard’s asking fee to appear were in fact US$1 million, then it would be very close to the entire prize money offered for the men’s event in Mexico. This would certainly confirm speculation that began circling late last year – speculation that players like Federer, Nadal, and Djokovic, had not slashed their appearance fees by a single cent since the start of the global health crisis.

Nadal has however stuck to his guns of his not yet having completed his rehabilitation sessions on a back injury sustained during the second week of the 2021 Australian Open. The beloved Spaniard left the tournament mid-interview after an onset of muscle cramps.

He recently said that his back problems dated all the way back to the start of this year’s AO, and that his suffering had continued during his run at Melbourne.